You are here: HomeUncategorizedJapanese Zen Garden 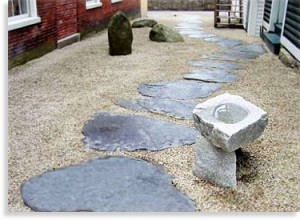 Wouldn’t it be great to have one those novelty desktop Zen gardens right outside your window? Japanese Zen gardens are a tradition over seven hundred years old. These gardens are called Karesansui in Japanese, which literally translates to a dry landscape. Like most things Japanese, there is a deep symbolism in all the elements of a Zen garden. The most famous and identifiable Zen garden is at the Ryoanji Temple in Kyoto, which was constructed in the 1400s. The dry landscape at Ryoanji is the quintessential Zen garden, surrounded by mid-height wall with an overhanging roof. The Zen garden at the Ryoanji Temple is easy to recognize by the long and skinny 3:1 rectangular layout.

The key elements in a Zen garden are rocks and chip gravel or sand. Trees are optional. In a dry landscape the rocks becomes little islands of landmass in the sea symbolized by the sand or gravel. The raked patterns in the sand were traditionally made by the Zen priests who managed the temple and used the raking as can exercise in concentration. The beauty of the patterns is they continuously change, symbolizing waves and movement in the water. This element of change is what makes Zen gardens into a living landscape that is never totally finished.

The placement and size of the rocks also has a secondary symbolic meaning. Historically the Zen priests were the only ones who could interpret the secret meaning hidden in the placement and shape of the rocks. Often the largest rock represents the Buddha and the smaller rocks represent his disciples. Other interpretations symbolize the soul, body, and heart.

Although tourists love to walk through and snap pictures, the original purpose of Zen gardens was for meditation. The Buddhist monks would sit in meditation rooms inside the temple viewing the garden in a state of calm. Psychologists have even studied the calming effect of Zen gardens, determining that the subconscious is able to see shapes, like trees, in the stones without being consciously aware. Many Asian landscaping relies on negative space for a calm, clean, and modern landscape.

Constructing a Zen garden is easy. Think of it like a tray or shallow sandbox that is filled with gravel. Although formal Zen gardens rely on rules and historical styles, it’s possible for a home Zen garden to be any shape or size. Zen gardens are almost always on a level site. Fortunately most properties have at least one level spot even if it is near the entrance, or back door. Even the smallest yard has room for an obelisk surrounded by raked limestone.

The first step is to build a perimeter that will contain gravel at a depth of two inches. Bricks and tiles are the most durable, but wood and other landscape edging will work too. Most Japanese Zen gardens use chipped limestone gravel, which is available in different sizes measured in millimeters, sometimes called mils or mm. 8 millimeters is the average size. Smaller chips are more prone to shifting like sand, while larger chips retain raking lines longer.

Choose a variety of rocks to be the central landscape features. In nature there is usually a blend of vertical and horizontal stones of varying height. Look for stones that look similar. A stone that does not fit in will cause disharmony in the garden design. Likewise stones with misshapen features are not desired. Planting a naturally horizontal stone in a vertical position is the ultimate faux-pas in Zen garden, so taboo it is comparable to raising the dead into an upright position. Always display rocks to feature their best sides.

Before adding the gravel material, anchor the rocks by burying them under the ground so the rock looks like it is naturally emerging from the earth. Once the featured rocks are anchored, a top quality long-lasting landscape cloth should be installed to minimize maintenance and prevent weeds from growing in the gravel.

Although it’s not required, additional elements can be added to a Zen garden. Evergreens like the Japanese Black Pine or Mugo pine are acceptable and fit into classic Japanese landscaping. Stone lanterns and other sculptural elements can add to the Zen theme. Finally a small fence or rope perimeter can be added to keep wandering feet and paws out of the garden.